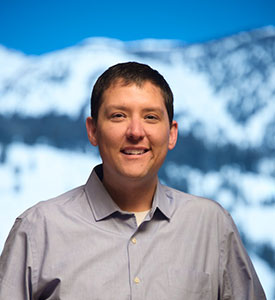 Before he was a realtor, Chris Grant was a fly-fishing guide. While leading trips for the historic Crescent H Ranch, Chris would explore Jackson’s many legendary rivers and tributaries. He took the skills he learned showing people where to catch wild cutthroat and brown trout to the real estate market in 2004, becoming a licensed broker in Idaho and Wyoming and introducing his clients to a different kind of treasure: their dream home.

Born and raised in Jackson, Chris started skiing and fly-fishing as a toddler. His mother is from Hawaii; his father from Kansas—they moved to Jackson in 1967 for teaching jobs with the Teton County School District and never left. Chris eventually moved to Oregon to attend Southern Oregon University, where he got a bachelor’s degree in geography, with an emphasis in land use planning and mapping—knowledge that’s come in handy in his real
estate career.

“It took leaving and attending college for me to fully appreciate what this
town and community has to offer,” Chris says. So, he moved back to the place that truly felt
like home.

After working as a fly-fishing guide for several years, Chris got his real estate license and started his career at Teton Village Realty before joining Jackson Hole Sotheby’s International Realty in 2009. He’s a founding member of the JH Property Group, a top=producing real estate team that’s ranked among the top 10 real estate groups in the state of Wyoming by Real Trends.

He met his wife, Courtney, when he moved back to Jackson and they married in 2008. They are raising their daughter and son—plus dogs—in the same tight-knit community where Chris grew up.