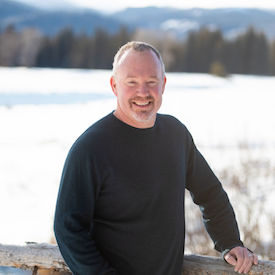 Brooke Walles learned to ski in jeans on snow-covered landfills in Iowa and Illinois. While growing up outside Chicago in the town of Wheaton, Illinois, he played football and wrestled. He attended the University of Kansas, where he studied psychology and played on the school’s rugby team. After graduating college in 1995, Brooke moved west to Jackson, Wyoming, but he never planned to stay. He came to ski and he worked in a hotel to cover his rent, but he figured he’d leave eventually, since he had plans to attend law school.

One year led to two, then three, and so on. Ski towns have a way of drawing people in for good. Now, Brooke and his wife, Mackenzie, are raising their two kids in Jackson, which has become their forever home. After playing rugby for 24 years, he now spends his free time fly fishing, skiing, hiking, and camping with his family throughout the Tetons and beyond.

Brooke got his real estate license in 2000 and he’s spent the decades since becoming one of the area’s top-producing brokers, thanks to his attention to detail, professionalism, and local knowledge of the Jackson Hole community. Working with people is his favorite part of the job, he says. He is a founding partner in the JH Property Group, which was named one of the top real estate teams in Wyoming by REAL Trends. He’s also a member of the sales teams at Hotel Terra, Teton Mountain Lodge, and Snake River Lodge at the Jackson Hole Mountain Resort.

Be the First to Know